This event was one of only two in the UK as part of the Kingdom of Ash tour and if you got a ticket, you were extremely lucky because they sold out within minutes. I have never had the pleasure of seeing our queen, Sarah J. Maas so I jumped at the opportunity to hear her talk about the books that I so dearly love. As there were so many people attending and Sarah is now a mummy, there was not enough time for her to sign everyone’s copy of the book. When I bought the ticket, I was given two options, a: ticket that included a pre-signed tour copy of Kingdom of Ash (sprayed edges) with tote bag, or b: ticket on its own. The organisers also had a raffle system at the door so that when you walked in, you were able to blindly pick out a raffle ticket. If you got a yellow ticket, you were one of the 50 who were lucky enough to meet Sarah afterwards and get your book personalised. I got to Cadogan Hall at 5:30 and there was already a fairly large queue and when we were seated, I overheard someone say that people had started to queue from midday.

Signed tour editions that were available for purchase

Katherine Webber was the host who asked Sarah the questions. I really liked her enthusiasm for both Sarah and the books that she has written. We didn’t only speak about Throne of Glass, we also touched upon A Court of Thorns and Roses as well as the adult fantasy Sarah is currently writing, Crescent City. The first thing that I noticed about Sarah, is that she is so beautiful and she has the best sense of humour. I found it hilarious how she fangirled over her own characters (Rhys in particular). She also understood how hard it was to talk about Kingdom of Ash without giving away any spoilers but she did a tremendous job and got around it well. Especially since everyone who had read KoA knew which parts she was talking about without her saying the exact words. It was really interesting to hear how she was inspired by music (Princess Mononoke soundtrack, Star Wars soundtrack & Fright Night soundtrack) and TV shows (Sailor Moon, Buffy the Vampire Slayer and the LOTR films). It was inspiring to hear that she knew the ending of certain characters before she even delved into their personalities and how she saw and heard their scenes and voices in her head before she knew who they would be.

Katherine and Sarah spoke about how all the women in both her series are such badasses but also about how they could still be feminine and be able to kick butt. All her female characters have such strength but their strengths differ and I found it a beautiful representation of all the women in the world. Sarah touched upon being a mother and how her brain changed during and after pregnancy. She told us that she wanted her readers to know that you would be pregnant/a mother and still be a fierce, strong woman and I think she did a wonderful job, not only showing us that through her books, but also through her own experiences of having a baby, releasing three books and going on tour all in one year. Quite a lot of the topics that were discussed left me in chills and goosebumps. 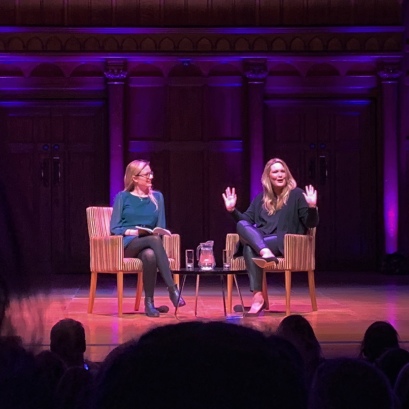 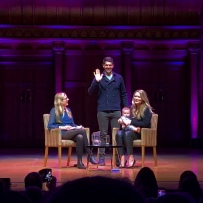 Prior to the talk, there were plenty of activities to keep the fans occupied. There was a photo booth where you could dress up as your favourite characters. There wasn’t time for me to try this out but from what I saw, there were crowns and red capes. There was also a stand where you could write a letter to Sarah and where you could write a question for her to answer during the talk. I accidentally came across her signature stamp and as I had my autograph book with me, I decided to stamp that! The tattoos and the wrist band were being given out as you walked into the building and I had seen someone else at a previous event stick their tattoo into their copy of Kingdom of Ash so of course I stole that idea! At the end of the talk, as I was walking out, I saw there were plenty of tattoos left over and so I asked if I could get a few more, hence why my autograph book, my copy of Kingdom of Ash and my Collector’s Edition Throne of Glass now all have this tattoo in them. 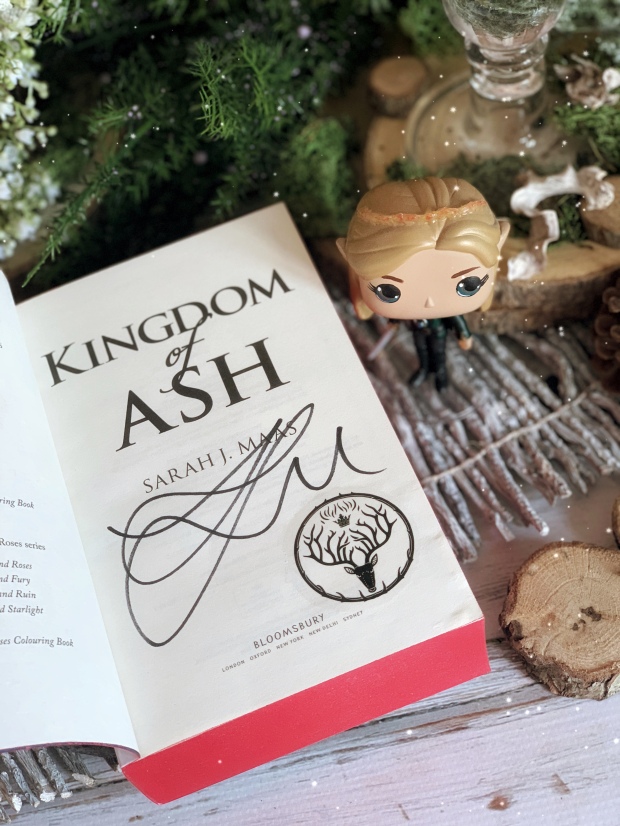 I really enjoyed this event. It was my first author event where I was on my own but I needn’t have worried because I made a friend whilst waiting in the queue and we were able to connect through our love of the series and Maas. In fact, even though there were plenty of groups of friends, I saw just as many people like me wandering about on their own and it made me relax. The venue was lovely and it was situated in a high end of London. Getting there wasn’t a problem either and the ease of my journey helped me relax further. As I said before, it was an amazing evening and I hope that I get to go to another one again in the future. I seem to have the bug now and can only grin when I think of it all.