‘Vicious’ by V.E. Schwab is brutal, full of pain and so, so good.

Synopsis: Victor and Eli are seniors who take a shared thesis to the next level. Can a near death experience give you an ability? Eli originally looks at it from a theoretical view but then Victor suggests they test it out. Things don’t go completely as planned and soon Victor finds himself in prison and Eli walks away on a mission of cleansing. Ten years later Victor has escaped and after a series of coincidences, he finds himself in the same city as Eli who’s been very busy leaving a trail of bodies in his wake. Victor is driven by revenge and betrayal, but Eli is driven by belief, who will come out on top?

I’m pretty sure that I am in love with Victor Vale. And I really dislike Eli Ever. I’m not that great at understanding religious characters, mainly because I’m not religious, so I found connecting with Eli quite difficult. I couldn’t see his reasoning the way he did and I found such a bright character so undeniably stupid about it all. Perhaps that’s why I love Victor so much. He might be obsessive and single minded, but he sees the world for what it is, he doesn’t let anything cloud his judgement. Eli is the most broken of the two. Not because of this beliefs, but even before he became an EO, he admitted to himself that there were parts of himself missing, which his NDE only amplified. Sure Victor similar parts missing, but he’s much more aware of the consequences.

Other characters worth a good mention are Mitch and Sydney. Mitch is probably the best person to be partnered with. His loyalty isn’t questioned and he doesn’t get in the way of the goal. He’s calm, fluent in the criminal ways of life and he’s hella smart. Not to mention he looks like he could fuck you up. He also loves chocolate milk. I mean, HELLO! absolute babe alert. Sydney comes across as older than her thirteen(ish) years and her power is impressive. It’s probably the best power that Victor could have in his team. My heart melted when Sydney realised that safe wasn’t a place and it was a person. I like her relationship with Victor, it comes across like father and daughter. Mitch is like a protective uncle or older brother. The lot of them have a real family sense going which is adorable when you get past all the murder. Or maybe it’s adorable because of the murder?

I found the EO (Extra Ordinary) part of the story hella interesting. I’ve personally never heard of a NDE giving anyone powers or abilities that defy nature but there are some truths in this story. I’ve done a little research since reading this book and I believe that Schwab also did some research as somethings line up well. I like that she’s taken the truth of NDEs in todays world and exaggerated them to create a powerful, dark world of her own. I would love to know where she got the idea for this book. Victor and Eli’s story has a tough of Frankenstein’s monster to it. Both students of science that take a theory to the next level, and create something that has unprecedented consequences.

There are so many great quotes in this book that I genuinely struggled to pick one. I settled on one that seemed to sum up the book as a whole. I cannot tell you how much I loved this book because words are not enough. This story spoke to my soul. I’ve always been weird (I recently read a book about Cannibalism), I’ve grown up being interested by powers (DC & Marvel enter here) and the human mind and its limits have fascinated me from a young age (I picked mental health as my photography project in A-Levels). So you can imagine my heart skipping plenty of beats whilst reading this book. If you’re like me, and love a dark tale of revenge between powerful characters, this is your book too.

“Plenty of humans were monstrous, and plenty of monsters knew how to play at being human.” 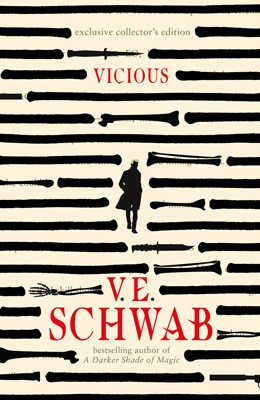