‘A Conjuring of Light’ by V. E. Schwab is everything. It’s life.

Synopsis: The Essen Tasch is over and there is discord in White London but not for long as Osaron has his eyes set on another. Kell and Lila, along with other surprising characters, take on a massive battle. Red London is caught in a black fog that corrupts and kills and it is a race against time to stop the spread. A god of magic is never sated but can our heroes will be strong enough to end it all?

I will say this only once: I had many feels for Holland in this book. His character has developed exponentially since A Darker Shade of Magic and his journey has undoubtedly been the toughest. He is underrated and I will forever cherish his sacrifice. Now, onto Kell. Compared to the first book, I felt like we saw a lot less of him. Not necessarily a bad thing because we needed those other view points to tell the story effectively, but I selfishly wanted more of him. Lila is still my girl crush and I lived for her POV’s (even mention of her in others) and I’m extremely happy with her ending. She managed to get what she always wanted and it was heartwarming to read.

I loved that all our heroes got their happy ending. Some less happy than others but happy nonetheless. Can I stop saying happy yet? There was a lot of loss in this book and it was difficult to read. After being with all the characters since the beginning when they were carefree, and seeing their world crumble and disfigure, and then read how they cope and adjust is hard. Sometimes they didn’t feel like characters to me, they felt real. It’s a testament to Schwab’s writing that she’s able to give life so eloquently.

The plot for this book had the most ‘urgent’ feel to it. It felt different to the previous two but strangely the same. It’s not my favourite but I’ve decided that they all become my favourites. This trilogy is a part of me now. To recap, let me sum up the trilogy for you via my condensed view point:

ADSOM – ‘Oh shit, Kell did something naughty, now they have to fix it’. (Kell’s book mostly).

AGOS – ‘Kell feels odd so he enters into a magic competition against other important characters while White London stirs’. (Lila’s book mostly).

ACOL – ‘All hell actually breaks loose, there’s a trip to a trinket market and many battles in varying power levels. Also, a previous enemy dies and takes your heart with.’ (Sorta Holland’s book).

I fucking loved it, obviously. It was a brilliant ending and I couldn’t be happier with this book. Conclusions are always so difficult to balance but Schwab managed it perfectly.

“And strategy is just a fancy word for a special kind of common sense, the ability to see options, to make them where there were none. It’s not about knowing the rules. It’s about knowing how to break them.” 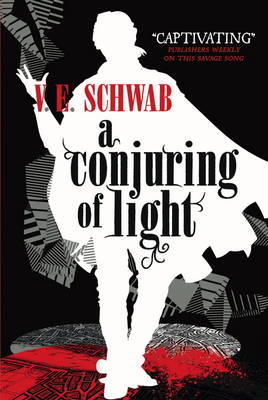