‘Fairytale’ by Danielle Steel was bland.

Synopsis: Camille has her whole life planned out, she’s going to work along side her parents at their winery and then take over when they retire. It’s been the family dream since the beginning. However, disaster strikes two-fold and soon Camille is left with a stepmother she doesn’t trust and a will that binds them together for seventeen months. Camille wants her stepmother gone, but the price is high and could cost her everything.

The book is based upon Cinderella and is a modern day re-telling of the classic. There are many similarities between the two as you can imagine but what I didn’t expect was the book referencing the fairy-tale it’s based on. Many times throughout, Camille would refer to Simone as her ‘fairy godmother’ and Camille and Phillip joked about turning into pumpkins and searching the land for the girl who’s feet fit into her shoes. I get this is, for want of a better word, a fairy-tale but surely a re-telling doesn’t reference the actual tale?!

Despite the similarities, there were many new lines of thought in this re-telling. Camille owns a successful business which definitely modernises the old tale. She has evil step brothers and not sisters. There’s no magic and there’s genuine danger involved. She’s no secret to Prince Charming and generally has more of a back bone than Cinderella ever had. This re-telling had the potential to be something great.

I found this book not difficult to read but it was frustrating. There are times where there are only two paragraphs on the page. Those are some hefty paragraphs and they also didn’t make a lot of sense. I found that the point of view’s would change multiple times within the SAME PARAGRAPH. Why is that necessary? I asked myself that question A LOT and the only answer I could come up with is that it’s told as a fairytale would be. The book is in narration prose and so there is no real POV, its just giving you a broad view of the story and in this case, it didn’t work well enough. It’s very confusing and disjointed.

There was a lot of repetition in this book and the majority, if not all, was not needed. There were many times where whole paragraphs had simply just been reworded. It felt like there was a lot of ‘filler’ and if you’d taken it all out, you be left with a much smaller book. It was already a small one (less than 300 pages) so imagine the final result if you edited the book correctly.

This was my first Steel book and I’m disappointed. I thought Fairytale was going to blow me away but it left a bitter taste in my mouth. Another story where the cover is much too good for such a mediocre filling. Another lesson learnt, just because an author is successful, it doesn’t mean their work is any good. 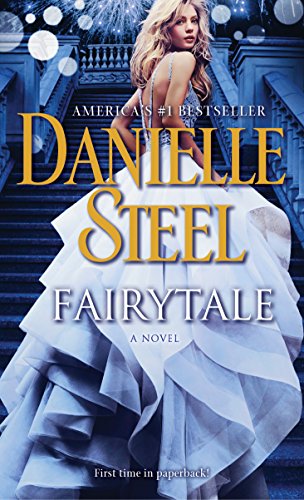