‘Between the Heart and the Blade’ by Amanda Hocking was full of action!

Synopsis: Malin is a Valkyrie in training, currently being overseen by her mother. When a stranger named Asher accosts Malin in her own apartment, accusing her of murdering his mother, she is pushed into a quest that could mean the end of the world as she knows it. Enlisting the help of her ex-girlfriend and her long time best friend, Malin sets about righting the biggest wrong there is.

I struggled to get a handle on Malin at first but as it became clear what a disappointing mother she had, I started to regret my initial assessment of her. Towards the end, when she admits her true feelings about her mother, is when I really felt for her. She has this real messed up view about what it means to be a Valkyrie and none of it is her fault. Which is why I am giving her some slack for the unfortunate love-triangle. It is something I HAVE to mention because it really grated on me. I don’t have an issue at all with who she ends up with, but pick one… ONE! In 319 pages, Malin has had more lovers than me in my entire life!

I loved the Norse mythology aspect of this book. I feel like this is slowly becoming more and more popular and I’ve definitely got a taste for it. It wasn’t just Norse mythology mentioned, this book taps into many others; one evil character at the end is actually from Mesopotamian folklore. This inclusion of all myths and legends was very interesting to me, despite not knowing how to pronounce many of the names but I’d love to take some more time and look up all the names mentioned. I also really liked the mash of mythology and the modern world. It allowed me to imagine what the world today would be like with creatures such as those mentioned, living in it.

I am familiar with Hocking’s work but it has been many, many (MANY) years since I have read anything of hers and so I was eager to read something new. It was a quick read but I’ll put that down to the writing and how easy it is to follow but the plot was gripping so perhaps my eagerness needs to be factored in. It’s a great first half to a duology and I hope it all ends well!

“It had begun – the instinct of the Valkyrie, pushing aside my humanity to become a weapon.” 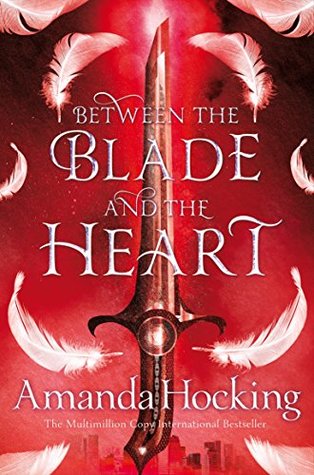