Synopsis: Mare and Cal find themselves on the run with the Scarlet Guard. From here on out, it’s a game of trust and second guessing the decisions made. Mare is on a quest to find the names on a list given to her by a friend, these people are like her, silver powers but with red blood. However, she’s not the only one with this list, Maven has it too and it starts a race that can only end badly.

Mare was deeply troubled in this book. She desperately wants to do the right thing and she wants justice. She wants Maven dead but she also misses who he used to be. Despite having Kilorn and Cal by her side in this book, I didn’t feel like they were there much for her and I believe that’s why she lost her way a little bit. Her uncertainty and the fact she felt like she had to make all the big decisions on her own, made her feel isolated. Once she started feeling lonely, she came across as more of a leader, appearing as if nothing affected her and so she felt she had to carry on wearing this mask. I don’t blame Mare and I love her all the more after the book. Also, SHADE. Goddamnit, I knew this going to happen (there were too many smiles from him, too many happy moments) but I was not prepared for it.

I blame Cal for Mare’s fate. Sure his strategic thinking and knowing how his brother worked came in handy a time or two but his rage at Maven and Elara tended to eclipse Mare. He wasn’t able to see the bigger picture like her and he saw what she was becoming too late. After their mutual outburst at each other, he shouldn’t have listened to her and should have stayed by her side. I don’t know. I felt like he failed her a little bit. He knew about those messages from Maven and let them fester in her mind. I hope he grows up in the next book.

This book is jam packed full of adventure. All the characters are constantly on the move, and I loved reading about all these new places they went. For Mare, they were also new places and I liked that we got to share that with her. I couldn’t get enough of the direction Aveyard took this story in. All those newbloods too! Talk about fucking interesting! I knew what Mare would do at the end of the book, there were too many hints spread throughout but I still loved it. I’m very interested to see how her situation develops in the third book. I hope we see more of Jon because I don’t think his loyalties lie with Maven AT ALL.

I’ve seen some reviews where people didn’t like Glass Sword as much as Red Queen and I literally can’t fathom why they would feel that way. It’s setting up the next 2 books so of course it’s not going to be like the first one. I was immersed and tried to read it every opportunity I got! 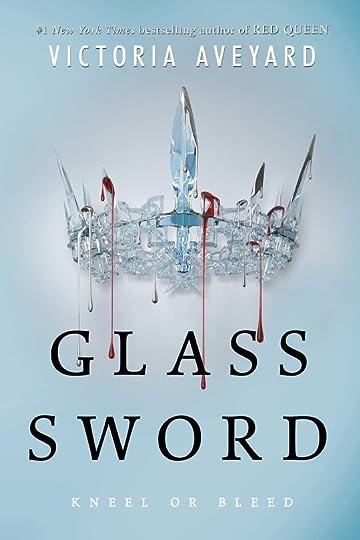