‘The Bitter Twins’ by Jen Williams is a tremedous and brave sequel.

Synopsis: The Jure’lia have awakened again and are up to their usual antics, however, they are still weak and have not been able to fix themselves; they are vulnerable. With only four war beasts, Tor and the gang are struggling too, this is not a normal Rain and memories of the past are hard to come by. With the threat ever looming above them, missions are given out and lies are uncovered, but will these long buried secrets help or hinder our heroes?

The Bitter Twins picks up perhaps a few days after the ending of The Ninth Rain. We enter into the corpse moon, following the Hest’s betrayal and it’s fascinating to see inside the great behemoth. We meet a new character quite early on too. Eri is an Eboran child and he quickly becomes important to everyone, without finding Eri, I suspect our characters would not know as much as they do at the end of this book. I found the Origin island unsettling and like Noon, I knew it wasn’t a good place. I was scared whilst they were there.

I’m not sure if the story was just so staggering, but I felt that I didn’t connect with Noon as much in this book. Perhaps it’s because the POV’s were spread more evenly? Her intuition is not to be underestimated and her loyalty could perhaps be her downfall. Tor matured a lot, I will put that down to the truth he uncovers. I’m happy that he an Kirune develop a connection and I love that Kirune is basically a moody teenager that doesn’t want to admit to wanting a kinship. Speaking of war beasts, I felt a deep sadness whenever Celaphon was present. It’s horrible what happened to him and how brainwashed he is. I hope that he can be saved. Hest I would like to see burned by Noon. Also, I would just like to say that I complete shit Aldasair and Bern! They were a bright light within this story.

I love the swearing in this book. Sometimes the language used (mostly by Vintage) was so unexpected that I genuinely belly laughed because the situations they’re in, are definitely NOT laughing matters but I couldn’t help myself. She seems to come out with the best one liners. I found myself enjoying Vintage’s POV this time round. Her strength and resilience grew on me and her knowledge makes her powerhouse.

For quite a lot of the book, I didn’t know how to feel. Some of the events I didn’t see happening at all and other scenes I expected. A lot of the time I was shocked and I was continually passionately invested in the story. I’d find myself in a mood if I had to stop reading and that’s how I knew I was in deep with The Bitter Twins. Somehow, I am caught in it’s web. I imagine that if a picture was taken of me whilst I was reading this, it would show my mouth on the floor and my eyes wide as saucers. The imagination that Williams has is extraordinary.

I loved The Bitter Twins. Again, it had so much going on but it wasn’t confusing this time. I think perhaps it’s because I know all the characters now and so their POV’s were familiar to me, and because the POV’s change so often, there’s never a chance for me to forget where I left them. The story is fluid, not once feeling swamped by the subject matter.

“Just between you and me, I’ve never crawled up a monster’s arse before. It’s quite exciting.” 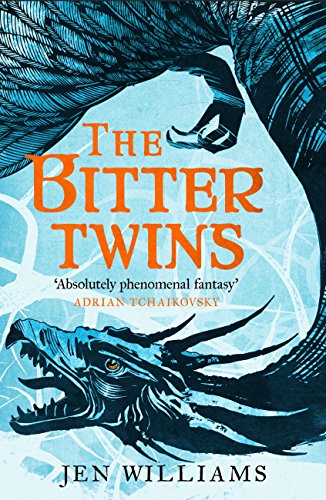