‘Empire of Storms’ by Sarah J Maas is truly epic. If it were up to me, I would place a picture of the book under that word in the dictionary, along with emotional.

This whole book is about Aelin and her court securing armies and allies as well as looking for the Lock and finding out what Aelin must sacrifice to save them all. It’s both a grand adventure of with old enemies and life debts come to aid and it’s heartbreaking. Not just for Rowan by the end but for Aelin who kept her fate a secret to protect her court. Aelin is still alive, but she’s been involuntarily set on another course and so it is up to her court to see that they win the war and carry on.

Aelin is such a force to be reckoned with. By the end of this book she has practically stolen the hearts of 4 of the cadre instead of the one it had started out with. Which just shows the reader that after 5 books of learning to lead, she’s done an immense job of it and has swayed the loyalties of 3 more Fae warriors bound to the old Fae Queen. It’s a testament to her humanity and that taking everything on to her shoulders has not been in vain. It sets the example not just to Maeve but everyone doubting Aelin as the rightful Queen of Terrasen.

Rowan’s Fireheart has taken everything into consideration in this book and has held each card close to her chest should it turn out for the worse. Aelin once said that she enjoyed her grand plan unveilings because of the looks on her courts faces, I’m so upset she didn’t get to see the biggest one unfold. Put that was a strategic move on Maas’ part as the scene has a much bigger impact to all the characters (and the reader) with the absence of Aelin.

I cried towards the end of this book. Most notably when Maeve told everyone how she’s been scheming in this game a lot longer than anyone else. I cried when it was confirmed that Rowan was Aelin’s mate. I cried when Maeve made her choose for Elide. I cried when they whipped her and she would not count. And I cried when Rowan arrived and found her blood soaking the earth and his Fireheart taken. Damn you Maas! I cried a lot. Huge baby when it came to that last chapter.

It’s agony knowing that the next book is not an extension of this story but a story focusing on Chaol that runs parallel to this book. I’m hoping that the last few chapters see us catch up with the rest of Aelin’s court so that we can glean an update of the current situation. I also hope that Chaol brings a few people to help. Perhaps a certain healer. We shall see. 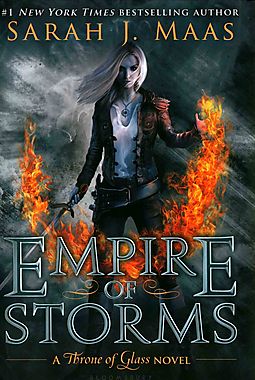